I Was Shocked When I Saw Buhari, He Has Lost Weight – Okorocha

Imo State Governor Rochas Okorocha has said he was shocked when he saw President Muhammadu Buhari in London on Sunday.
He said the president has lost weight.

The governor, who along with some All Progressives Congress leaders visited the President on Sunday, said his surprise was because of the rumours and conspiracy theories that had made the rounds regarding President Buhari’s health.

Since May 7 when the President flew to London for medical treatment, he hasn’t been seen in public many people claiming his health had declined.

Governor Okorocha explained during an appearance on Channels Television’s Politics Today that in Buhari’s absence, there was a lot of confusion and speculations about his health and it took the Acting President Yemi Osinbajo, who visited the President on July 11, to reassure Nigerians that the President was in good spirits.

“Even then, most people didn’t believe it. But to my greatest shock, when I arrived in London with the Party Chairman and the governors of Kano, Kaduna, Kogi, Nasarawa and the Minister of Transport, we saw a man that was full of humour as usual and we were wondering whether it is the same person that they are talking about,” he said.

The governor said considering how healthy the President looked, he was surprised he had not already returned to Nigeria.

He said, “When I made enquiries as to why he is still waiting, why he is still not back home, all I got as an answer is that he is just taking some vitamins to increase his appetite to regain his lost weight.

“But I think the man is in good spirits and I think the prayers of Nigerians have worked to a great extent and President Buhari is coming back in full force to resume his work. What Nigerians should be talking about now is what should be his next line of action.”

Asked when the President was likely to return, he said, “The Buhari I saw two days ago will be back to Nigeria as soon as possible. I don’t think that he will stay longer than necessary, unless for some other reasons. I saw a man that was quite healthy, in high spirits and very sound – except for the fact that he has lost a bit of weight.” 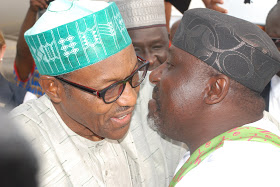