– The report on constitution amendment bill was presented on Tuesday, July 25 by the Deputy Senate President, Ike Ekweremadu

The 1999 Nigerian constitution is about to receive a huge face-lift. On Tuesday, July 25, the Senate received a 33-item report on the fourth alteration of the constitution.

The report which calls for huge changes in the constitution was presented by the Deputy Senate President, Ike Ekweremadu.

One major change being proposed is the alteration bill which seems to be in tandem with the “not too young to run” movement in Nigeria, seeking improved access for the Nigerian youth in government.

The bill now proposes 35 as the minimum age for the office of the President and being elected to the Senate; and 25 for the House of Representatives.

According to Premium Times, other amendments included in the 33-item list are:

1. Reducing the powers of the federal government in the exclusive legislative list

3. Downward review of the minimum age for elective public officers, among others.

4. Devolution of power to the states.

5. The bill also seeks constitutional provision to compel president and governors to submit list of ministers and commissioners respectively, with portfolios and 35 per cent affirmative action for women, within 30 days of inauguration.

6. The bill also seeks to ensure that minister for the Federal Capital Territory is appointed from one of the six area councils that constitute Abuja, so that that FCT will be represented in the Federal Executive Council.

7. In seeking autonomy for local government areas, it proposes that only democratically elected councils can directly receive allocations from the federation accounts. In effect, the bill intends to abrogate state-LG joint-account system.

9. The bill also seeks to obligate the president to address a joint session of the National Assembly once every year on the state of the nation, and also seeks to expand the National Council of State to include the President of the Senate and the Speaker of the House of Representatives.

In the circumstance of unelected council, the bill calls for no allocation to such local council.

However, Foster Ogola, a PDP Senator from Bayelsa complained saying: “This issue that concerns my own people is excluded,” while making an argument for true federalism and economic restructuring so that everybody can control his resources.

Also, an APC Senator from Kebbi, Adamu Aliero, asked the Senate to step down the item on devolution of power, because it was wrong to give state more powers without greater share of the national revenue.

He also said that the Senate should allow the lawmakers to make further consultations before voting on the provision for affirmative action for women.

But Binta Masi, of APC-Adamawa, countered Mr Goje, urging his colleagues to sustain the item in the alteration bill.

“How do we speak of local government autonomy, without addressing the foundation?” he asked.

The Senate is expected to vote on each of the proposals from Wednesday, July 26, though Kabiru Marafa, APC-Zamfara, and Mr Goje demanded further consultations with their constituents before taking decision. 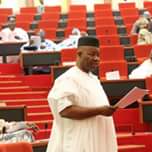 I Was Shocked When I Saw Buhari, He Has Lost Weight – Okorocha