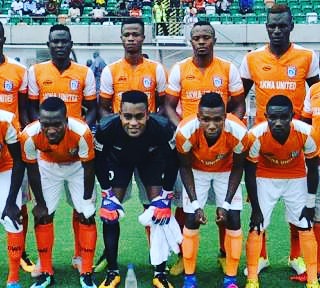 Akwa United produced a blistering performance in the second leg of their CAF Confederation Cup Preliminary Round match to beat Hawks FC of Banjul 0-2 and qualify to the first round on Wednesday.
Cyril Olisema scored in each half to hand the Promise Keepers a famous victory as they overturn a 1-2 deficit to qualify to the first round on a 3-2 aggregate score.
Akwa United went into the match needing to win by two clear goals after losing the first leg at home 1-2 to the Gambians.
Coach Abdu Maikaba presented the same team that lost in Uyo and got the needed result which helped them to advance to the first round of the competition for the first time in their 20 year history.
The Uyo based side dominated their opponents and enjoyed greater percentage of the ball throughout the  match in what was a near flawless performance.

Akwa United had their first real chance to go in front in the 20th minute after Aniekeme Asuquo’s cross was handled by Antou Badjan in the box.
The referee pointed to the spot. Denis Nya stepped up and sent the goalkeeper the wrong way but his spot kick hit the post.
In the 31st minute, Victor Mbaoma received a pass in the Hawks box but his goal bound drive was cleared off the goal line by Antou Badjan.
Five minutes later, Cyril Olisema benefitted from a loose ball on the edge of Hawks box and calmly beat Adama Gassama to score and give his team a deserved lead at half time.
Few seconds after the restart, Kelly Kester robbed Omar Sarr of the ball in the midfield and located Olisema who volleyed home from 30 yards to secure his team’s second round passage.
The Promise Keepers will next engage Libyan side Al Ittihad in March.